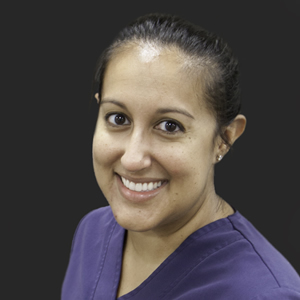 Nadia S. Fazel, DMD, MPH, is originally from Phoenix, AZ. She has a Bachelor of Arts degree in English Literature from Lake Forest College in Illinois. After college, Dr. Fazel joined the Peace Corps and lived in West Africa for 2 years teaching English as a second language. Along her journeys, she decided she wanted to follow in her father’s footsteps and become a dentist. She graduated from the Arizona School of Dentistry and Oral Health in 2014 completing both her dental degree and her Masters in Public Health. Her Masters project consisted of developing an encounter system for the homeless campus in downtown Phoenix. The ultimate goal was to help curb, and even end, homelessness in the greater Phoenix area. After dental school, Dr. Fazel completed a one year General Dentistry Residency at St. Vincent de Paul’s dental clinic in downtown Phoenix. Dr. Fazel moved here from New Mexico, having worked two years at a community dental clinic in rural New Mexico. She’s very happy to be here along with her husband, Jordan, and their crazy dog, Ragnar.